As a modern gal with roots in both Georgia and New York, you could say, I’ve been spoiled with great food surrounding me at all times.  Southern and soulful foods around every corner in Atlanta… New York City’s food scene was a foodie’s delight – delivered at any hour, if one is hungry enough! But, having moved from the East Coast to an medieval village in Austria, my spoiled belly has become more creative in its self-preservation… Don’t get me wrong, there is a ton of good, no, GREAT food here, too.  It just doesn’t remind me of ‘home’.  These days, I’ve embraced my cravings more as challenges.  I’ve also learned that everything can be made from scratch – and, often, it tastes even better!

Now, I am no BBQ pit master, by any means… but, darn it, if that’s going to stop me from making some pulled pork and baked beans when the craving hits!

Since I don’t have a smoker or twelve hours to wait for a brine to work, a girl’s gotta do what a girl’s gotta do… she’s gotta improvise!  I researched a few recipes – a few long ones and a few short ones – and came up with this relatively quick and easy way to get pulled pork all the way over here in Austria.

This recipe was a cinch to make… and tasted great!  It’s the closest thing to real Southern pulled pork that I’ve had in a long time!  I didn’t serve it traditionally on a bun or with mac and cheese… I put the pulled pork on a floured tortilla and dressed it with fresh avocado and red onion… and a splash of lime juice – it was a great symphony of tastes.  Try it!  It’s delicious!

Update: And, for my European friends who want to try the whole Southern experience from scratch, here are a few starting points:

Baked Beans from Pioneer Woman (I would skip the bell pepper.)

a bottle of your favorite BBQ sauce 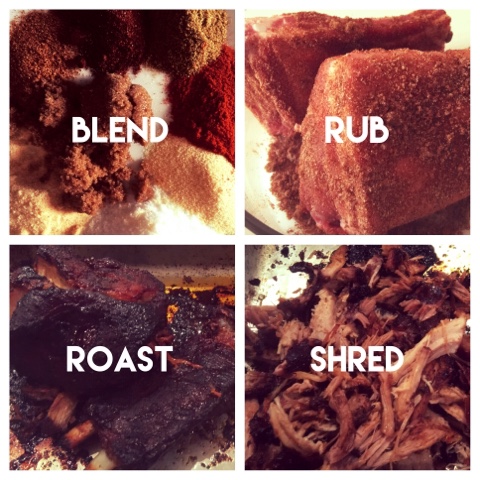 1.  Combine all of the seasonings.  Rub onto the pork.  Get into every crack and crevice!

2.  Cover and refrigerate for an hour minimum… 2-3 hours should do it.

4.  Place pork onto roasting pan and roast for 5-6 hours.   If you’ve got the luxury of more time, go slower for longer time at this low heat… it’ll taste even better!  Rotate the meat every now and then while it roasts… every side needs to develop that flavorful crust.

5.  Baste with BBQ sauce around the 5 hour mark.

6.  Pork should be done at 190-200 deg F.  It’s ready when the meat falls apart when shredded with a fork. (Naughty tip: I shred the pork directly in the roasting pan with all of the lingering flavor, oil, and burned bits.  Don’t pour out the oil, unless it’s really too much.  Shredding it directly in the pan eliminates dry pulled pork.)  Cover with aluminum foil until ready to serve.

8.  Layer on the pulled pork, avocados, red onions, and a squeeze of fresh lime.  Add a side of baked beans and an ice-cold beer.  Devour! 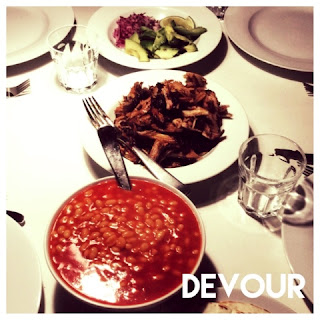 View all posts by Susan Hoang